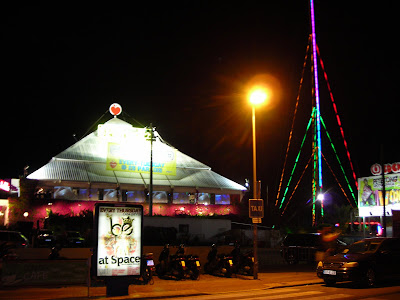 Cost of entry: 33€ from Clubtickets.com—these tickets were the only ones that didn’t include guest list entry, but it didn’t matter as the line was short

Transport: Took the Discobus for 12€ roundtrip from Playa den Bossa

I’ll be the first to admit, happy hardcore music isn’t for everyone, and is definitely a required taste. I, myself, don’t personally like every happy hardcore song I’ve ever heard, but nonetheless, the prospect of seeing Cascada, one of the few European artists who actually gets radio play here in the States, was more than enough for me to check out Clubland, as not much else was going on that Tuesday since Armada Night hadn’t yet begun. After spending much of the evening dropping 10€ per drink around the Sunset Strip, my buddy and I made our way over to Es Paradis around midnight, finding it no longer important to waste more money at the bars. When we arrived, there was a short line in front of us, as it only took about five minutes to make our way through, and no one was frisked (FYI, this is a VERY camera friendly club). On the inside, the club was mostly empty, so I had doubts as to how full it would get later that night, but nonetheless the first DJ was already spinning some pretty good tracks, and the club featured a host (although annoying at times,) that constantly kept the crowd involved and on their feet. Moreover, the crowd that was there appeared a lot younger and more upbeat than previous outings at other clubs—I wasn’t quite sure what to think of this at first, but as it would turn out, this happened to be the friendliest crowd of any club, as the people were very social and unpretentious. It should be noted that another thing that surprised me about the crowd was that numerous people would help pick up the bottles that they saw fall on the ground to ensure that no one stepped on broken glass, which was a definite problem at other clubs.

As for the club itself, it had several noticeable positives from the beginning on the night—cheaper drinks than any of the other clubs (5€ for most drinks before 2 AM, with a slightly higher price after 2 AM), several places to take a breather away from the dance floor (these also offered great views of the club), and ample seating surrounding the dance floor itself. Overall, the club wasn’t overbearing in size, as it seemed to be at the perfect median between too large and too small. The entire club was decorated with a white interior, from floor to ceiling, including many gigantic white stars that dangled down from above. 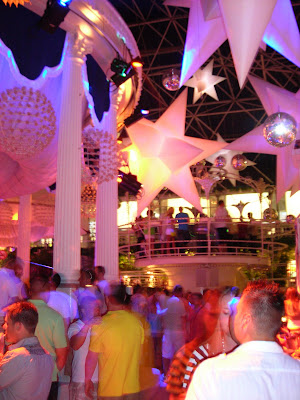 ​
As for the main dance floor, it was sunken down in the middle of what looked like a circular Greek amphitheater, with a small DJ booth at one end, and a suspended single-person dance floor above the whole thing, where one girl at a time would take turns dancing above the crowd. 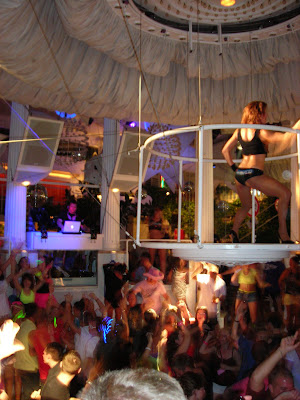 ​
As the night wore on, the entire place began to fill in, first at the dance floor, then the traffic worked its way back and out throughout the rest of the club, however, at no point during the night did anywhere outside of the dance floor become overly crowded, which was good. As each DJ came and went, there was no decline in the quality of sets played surprisingly, and as the evening approached 3 AM (if I’m not mistaken), the DJ playing took a break, and Cascada entered the stage on the other side of the club, singing her new single, Evacuate the Dance Floor. 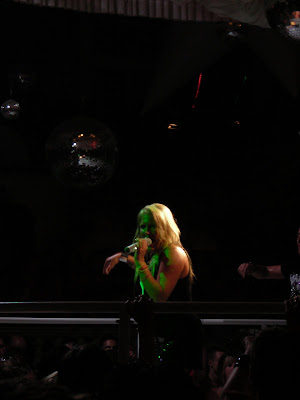 ​
While I thought that Cascada would be the highlight of the night, as it turned out, all the while she sounded great live and sang for about 30 minutes, she provided a great interlude in between the DJ sets as well as a slightly different taste of sound to the night for a brief while—which wasn’t bad at all. After she cleared out, it was back to the dance floor with the rest of the crowd til sunrise, after which everyone who stayed til closing was given free bracelets to return the following evening.

All in all, it turned out to be a pretty good night, as the social and upbeat nature of the crowd more than made up for the otherwise cheesy nature of the music (but of course, that was expected of the music). Overall, if you even remotely like happy hardcore, check out Clubland, you might be surprised at how good it can be…
Last edited by a moderator: Jul 1, 2009
O

+ for whoever it was that missed seeing go-go girls in the clubs, there's a few in picture 3
H

Olly said:
+ for whoever it was that missed seeing go-go girls in the clubs, there's a few in picture 3
Click to expand...

I don't mean to be nasty but how the F*** can Clubland have been the highlight of your week in Ibiza??? Something has gone wrong somewhere lol
O

I think we have 2 possible scenarios here, hauskitten

Have I missed something here? Where does the OP actually say Clubland was the "highlight" of their holiday? The review just says "it turned out to be a pretty good night."

Far be it from me to defend Clubland... I've been laughing at some of the lads in my group for months for planning to chose Clubland over both Armin AND Coxy. I will be doing nothing of the sort, of course.

He even put in various disclaimers to try and avoid snobby remarks.
H

Phil Pizzaman has expressed his views on other nights and I'm sure this is his fav..

Can you imagine sucking a tube of Primula soft cheese dry? Disgusting thought isn't it!

Maybe so, but still, a little unfair to put words in his mouth like that.

At least Pizzaman took the time to go to Amnesia and Space (and review the nights there). A few of the lads I'm flying with only have Tiesto, Clubland, a Water Party with DJ Sammy and Twice As Nice on their itinerary.

Save your sneering for something else,this is a well written,informative and interesting review,and there are not many like that about Es Paradis,be glad someone bothered to let you know what one of the nights was like..

Don Simon said:
Save your sneering for something else,this is a well written,informative and interesting review,and there are not many like that about Es Paradis,be glad someone bothered to let you know what one of the nights was like..

All of Pizzsman's reviews have been excellent. Probably the most informative to be posted so far this season.

Phil_Dicko said:
All of Pizzsman's reviews have been excellent. Probably the most informative to be posted so far this season.
Click to expand...

From a pure punters point of view yes,think you are right

Lighten up guys Pizzaman and I are buddies I just feel I owe him a few bitchy comments after all he is ageist lmao... now I'm not slating his review it was completely charming with great pictures his grammar is near perfect a few too many apostrophes maybe but who am I to judge when I dont even bother with any

Im loving the name of the single "Evacuate the Dancefloor".

At least the birds sense of humour makes up for the lack of credibility!
H

Phil_Dicko said:
Far be it from me to defend Clubland... I've been laughing at some of the lads in my group for months for planning to chose Clubland over both Armin AND Coxy. I will be doing nothing of the sort, of course.


I would choose swine flu over Clubland.

Don Simon said:
Save your sneering for something else,this is a well written,informative and interesting review,and there are not many like that about Es Paradis,be glad someone bothered to let you know what one of the nights was like..

i'd go as far to say it's the best review we've ever had on the forum.
O

I see the musical snobs are out in force again!

It's nice to read reviews of nights you wouldn't necessarily go to. There's only so many Cocoon reviews I can read. They're basically always the same! (Sven was amazing/too packed/extortionate prices etc etc)
G

we'll publish this one on the main site, nice work, very informative, exactly what thousands want from a review, regardless of musical taste.

the only reason your other two reviews will not be published is because we already had a cream opening review and a we love one.

but we'll put a "see more reviews from Pizzaman" link on this when published.