Five young art students from Ibiza have been fined €2400 each for painting on walls in San Antonio. The incident took place in March 2007 when the lads had had a few beers and decided to decorate the walls which unfortunately were private property.

It's a thorny old problem whether Graffiti should be regarded as street art or vandalism. Here are some examples taken from Ibiza's facades – you decide!
G

i can understand how the owners might be a little annoyed.

BUT, the artwork is fantastic!!
W

grego said:
i can understand how the owners might be a little annoyed.


Ditto. Imagine how good it would have been without having consumed the beers ?!
L

I thought that first image was a photo of one of the artists when I saw it at a glance. Amazing artwork. Depends where they graffitied though I suppose
B

There is some amazing graffiti around, I thought they had permission to do the stuff like shown in the Photo`s ?, Fair enough , fine the crap out of the people that just "tag", I don`t know if he still does it , But there used to be a "graffiti painter over" employed by the council ?
I have also seen a graffiti`d up van of a company that I believe also get`s "work" off the council, They did the one on the side of the motorway,
Have a good one
Tim

blackswan555 said:
I don`t know if he still does it , But there used to be a "graffiti painter over" employed by the council ?
Click to expand...

colin gradon..... he still does it (there are various "colin kiss my ass"/etc around the island on top of his white paintings

) and he is NOT employed by the council

do a search on google if you want to find out more about him.....
G

that reminds of the graffiti artist in leeds who created his art by cleaning dirty buildings and tunnels.

Twas my Daughter that told me about him, So I am blaming her lol. But have seen some of the Colin kiss my,, etc about,

Have a good one
Tim

blackswan555 said:
have seen some of the Colin kiss my,, etc about
Click to expand...

have you seen the one with a wee penis after his name?

btw, if you ever see a white cross on top of a graffiti it means "i'll be back to finish the job" (or "i ran out of paint"

First pic is in the tunnel next to the bus stop is Eivizza which is very nicely done. Who gets the point of tagging? Not Banksy! 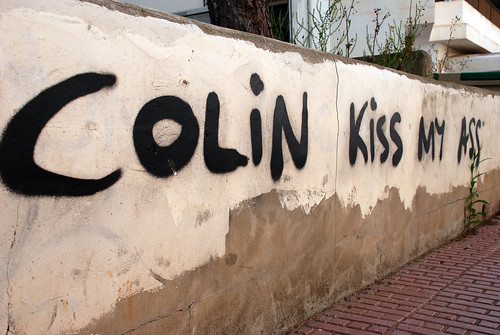 Seen a few of these recently, thought it was some kind of malice/revenge of a spurned lover ! 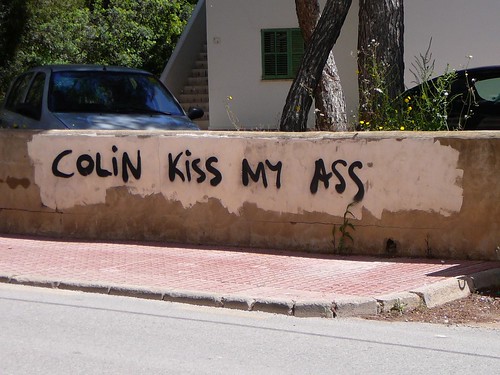 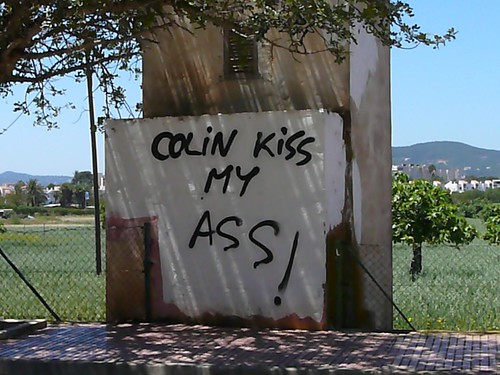 ^
Saw a parrot in that tree,looked like it was reading the message to colin ! 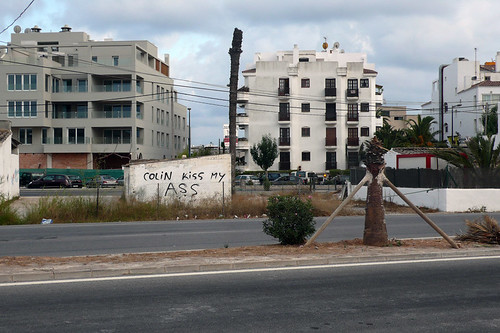 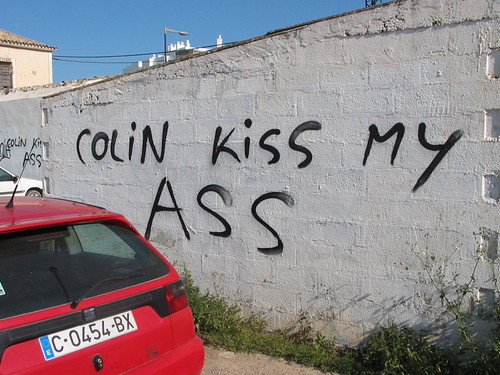 Im still about,was in Ibiza last week,didn`t cover any graffiti,as there was little new ones.I did notice that someone has been covering over the kiss my ass ones.I wonder who it is.Have you noticed the bouganvilla by the brick works,at the corner before the go-karts ,hard to paint there now,one of my ideas.The guy who painted kiss my ass is HOSH,JEROME,2 vandals who live on Ibiza,covered one of theirs over last Dec,after watching them paint it for 2 days,it must have cost them a few euros.But its their problem,and did they get a shock as they showed off their new piece to their mates,hasta la proxima.Mr Dragon.