I suppose it always a risk being a regular on the party scene, and a WAG/model. But you've got to feel for the girl

Quite alot of claret there. She has had emergency surgery to a bad gash lol on her leg and back.

According to the always-reliable Sun, the poor girl was sitting on a sofa when some dimwits were dancing up on some ledge behind her and maybe kicked her. She gets up to complain, fight starts, and she goes flying onto a glass table. Ouch! 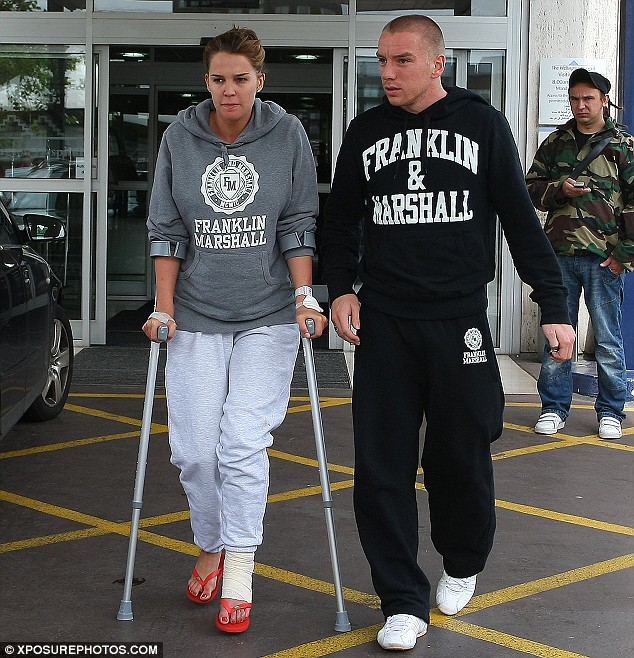 Every cloud has a silver-lined sponsorship opportunity though!

As much as I hated her on BB, I do feel sorry for her in those photos. I wouldnt wish that on anybody.
W

what retard puts glass tables in a club ?
W

icebaer69 said:
what retard puts glass tables in a club ?
Click to expand...

Buckley said:
Every cloud has a silver-lined sponsorship opportunity though!
Click to expand...

As a teenager, I spent 2 summers at Franklin & Marshall college!
It's a small uni... doubt they'd have money for endorsement

Morbyd said:
As a teenager, I spent 2 summers at Franklin & Marshall college!
It's a small uni... doubt they'd have money for endorsement


It's a very popular make among certain folk in the UK mate - I'd say they do pay for endorsement.

Buckley said:
It's a very popular make among certain folk in the UK mate - I'd say they do pay for endorsement.
Click to expand...

It's a tiny little university in the middle of Amish country. Just missed out on being Ivy League at some point.

Probably some fashion label bought rights to sell their gear.

Edit: Well, you learn something new every day!

Wikipedia said:
In 1999, after seeing an official Franklin & Marshall sweatshirt, a company[5] based in Verona, Italy began producing clothing in a vintage 1950's collegiate-style with the words "Franklin and Marshall" on them. F&M alumni began to report seeing F&M merchandise for sale in Europe, which puzzled the college.

In 2003, after lengthy discussions, the college decided not to sue and instead agreed to accept a licensing fee from the company so that they could continue to produce their products, which had begun to gain popularity with youth, especially in the United Kingdom
Click to expand...

icebaer69 said:
what retard puts glass tables in a club ?
Click to expand...

Ironicly, the club is called Crystal.
I had the misfortune to end up there a few weeks ago.
A horrendous place.
We left after 15 minutes.
O

for what it's worth, I went to puerto banus on some stag venture a few years back and I saw her, some other dollies and glen johnson enjoying a bit of a canoodle on some vip deck outside the club....

it was beyond parody
N

I would sex her racist mouth8)
N

There's no such thing as bad PR eh!
W

NITEFLY said:
I would sex her racist mouth8)
Click to expand...

weloveliam@space said:
I'd have sticky second's 8)
Click to expand...


and i'd most definatley have sloppy thirds 8)

Buckley said:
It's a very popular make among certain folk in the UK mate - I'd say they do pay for endorsement.
Click to expand...

Well, according to this story, they didn't pay for endorsement.

But they did put out this press release in hilariously bad taste!

“Poor Danielle Lloyd. After being battered in a nightclub, Danielle can now rest up in the comfort of her Franklin Marshall hoodie.

“Franklin & Marshall is the ultimate in understated American college-inspired casual wear — the perfect recipe for Danielle’s recovery. Why not double up and get an identical tracksuit for your boyfriend a la Danielle and top Tottenham player Jamie O’Hara? Get well soon Danielle.”
Click to expand...

Must admit my Franklin Marshall sweatshirt has been added to the put on ebay pile!!

madwhitegiant said:
Must admit my Franklin Marshall sweatshirt has been added to the put on ebay pile!!