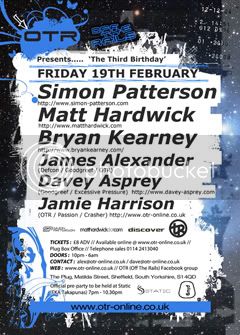 It seems like just yesterday Off the Rails was breaking the mould with our first ever event at the Wicker Arches. With laser cut Arch ways and a truly world class DJ bill OTR gave Trance the much needed beat injection it had been craving.

3 years on and based at the award winning Plug nightclub, in Trance’s spiritual home of Sheffield, OTR has become a staple to the clubbing calendar.

So this year, to celebrate our 3rd birthday in style, we bring to the Plug some pure beat therapy of the highest order. Rest assured, this is going to be a night of epic proportion!

Headlining proceedings is one of the most requested and sought after artists in the world at the moment SIMON PATTERSON. One of the hottest properties in dance music right now, his creative offerings as a producer have captured audiences, bringing them willingly along with him on his musical adventure. From techy moods to edgy riffs, spin tingling melodies to driving baselines, Simon’s studio offspring’s of the past 12 months have raised his profile to see him become a much in-demand dj, producer and remixer.

However, it’s when he’s behind the decks that the sound of Simon comes alive. With a style described as cutting edge, dark, driving, pulsating, Simon’s technical ability is a finely tuned art that fuses trance with elements of techno and electronica. If you’re stood on a dance floor when Patterson’s behind the CDJ’s you know who’s in control, and the only thing you’re likely to do is to dance and dance hard.

Second up is Sheffield’s very own MATT HARDWICK making his hugely anticipated return to OTR. Matt Hardwick is the epitome of an international DJ. He lives and breathes electronic music. Since his inception into club culture Matt Hardwick has completely immersed himself in it. His rapid ascendany into dance music with the global phenomenon that is Gatecrasher is something which has been well documented. The association with Gatecrasher, the first of many landmark achievements in his career, took Matt's name from the dusty streets of Sheffield to the bright lights akin with international stardom, along the way seeing him play some of the greatest events the world of clubbing has to offer.

Last but not least we bring from Ireland the tech master himself BRYAN KEARNEY. Bryan is a pure technician behind the decks, keeping the crowd going to the early hours with his infectious mixing and speaker bleeding bass. Hitting the OTR decks for the third time Bryan is once again expected to tear the roof off the Plug as only he knows how.

Supporting this months artists and headliners in their own right, is none other than James Alexander, Davey Asprey and one of our residents Jamie Harrison.

The stage is set and the count down has begun for what is set to be a birthday to remember. The birthday candles are well and truly going to be blown in style…. Make sure you’re part of it!

Nearly one week to go and counting until OTRs massive third birthday!

Tickets are selling fast! Get yours from http://www.the-plug.com/events-and-tickets/off-the-rails

Just to get you in the mood for the main event check out this promotional video from the OTR & Riot event on the 27th of December.

See you on the dance floor x
O

With OTRs third birthday rapidly approaching and the anticipation well and truly building, we bring you can exclusive interview with Bryan Kearney ahead of his huge gig at OTR next Friday!

HI BRYAN, HOW ARE YOU TODAY?

Hi mate, not too bad today. Had a hectic weekend playing over in Slovenia with a lot of travelling involved so just easing myself back into normality. I should be back to working order tomorrow.

WHAT WAS YOUR FIRST EXPERIENCE WITH TRANCE AND HOW DID YOU GET INTO IT?

I think my first experience of trance would of been in or around 1998/1999 when it was considered to at it's peak. I've always been a huge fan of energetic music and i became addicted to the music that would frequent the likes of the Euphoria/Ministry Of Sound compilations and was constantly listening to and buying new cd's and making my own tapes etc. I got my first set of decks in 2000 and I've been completely obsessed ever since. I'll never forget my mother saying to me that it was just a phase and I would of grow out of it. She couldn't of been more wrong as my love for music continues to grow by the day.

CAN YOU DESCRIBE YOURSELF IN THREE WORDS?

A lot i hope. I have a lot of plans for the year ahead and I am currently putting them all into action. I am starting my own label which will launch in April of this year. I have loads of brand new productions on the way and some great gigs as well so fingers crossed it can be good for me.

AWAY FROM THE MUSIC SCENE, WHAT DO YOU DO IN YOUR SPARE TIME?

I dedicate nearly all my time to my music in some shape or form but aside from that pretty much the same as everyone else really, football, going to the gym and having a laugh with my mates.

IF YOU COULD BE ANY ANIMAL WHAT WOULD IT BE AND WHY?

A dog so that i could piss wherever i want and not have to worry about getting arrested for it.

FINALLY...WHAT CAN THE OTR THIRD BIRTHDAY CROWD EXPECT FROM YOU ON THE 19TH?

They can expect a lot of energetic fast paced music comprising the very best in trance and techno. They should also expect the unexpected because I always have a few cheeky tracks prepared for each gig. Bring it on
O

Its almost upon us. OTRs massive third birthday event at The Plug THIS FRIDAY (19/02/10).

Tickets have been absolutely flying out all month and this is going to be one hell of a night to remember.

Make sure you're part of it!

For those that don’t have your tickets yet, they are still available from -

Tickets will also be available on the door on the night of the event!