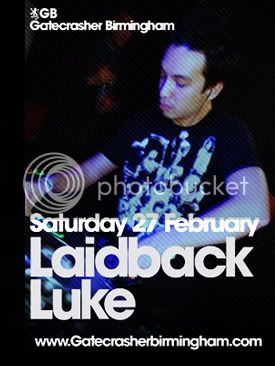 Laidback Luke
Gatecrasher Birmingham
Saturday 27th February
Holland’s beloved house music-loving homeboy, Laidback Luke, is on an international mission to rock clubs, win hearts and top charts. A producer and DJ with immense talent, tonnes of spirit and a steely determination to succeed, he has been on a worldwide search for the ultimate in dance floor energy since the mid-1990s. "Music is an amazing tool that can evoke powerful memories and emotions" says Luke with a smile. "And I will not rest until I’ve given my best: I want to share as much music as possible with as many people as possible" And with an incredibly impressive discography of 100+ recordings and a DJ diary that takes him from his studio near Amsterdam to clubs all over the world, it would seem that Luke is well on the way to achieve his goals.
See Him Live @ GATECRASHER BIRMINGHAM – 27th February 2010!
LINEUP:
_____________________________________
Main Room
Laidback Luke
Dave Thatcher
Jimmy Kenned
Mansion
Indie & Alternative
Si Edwards
Arkade
Cool Pop
Bed
RnB with
Lee Smith
Advanced Tickets
£10.00 + BF Early Birds
Available from www.gatecrasher.com/tickets
******* WIN TICKETS **********
FOR YOUR CHANCE OF WINNING 2 X VIP TICKETS TO SEE LAIDBACK LUKE ON SATURDAY 27TH FEBRUARY, SIMPLY TEXT GC LUKE TO 61211 (TEXTS COST UR STD NETWORK CHARGE ONLY)
You must log in or register to reply here.
Share:
Facebook Twitter Reddit Pinterest Tumblr WhatsApp Email Share Link
Top