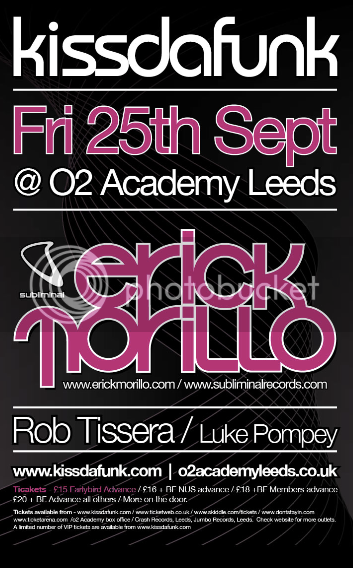 **TEN REASONS WHY YOU CAN'T MISS ERICK MORILLO at KISSDAFUNK***

1. Erick Morillo is the ultimate Superstar DJ and this will be a very rare change to see him in Leeds

2. The last time he played at KDF, Leeds at the end of 2007, he caused a complete roadblock, making it the busiest KDF to date.

3. Also the head of Subliminal Records his Wednesday Subliminal Ibiza Parties at Pacha are synonymous with the party island.

4. Those who came to our Bank Holiday Party with David Guetta & Laidback Luke will know how awesome the 02 can be as a venue.
here's a video. A high resolution version will come along soon.

5. He is undoubtedly the DJ with the most glamorous lifestyle. Constantly jetting around the world, often in his private jet he's given himself a name as a bit of International playboy.

6. While playing hard he also works harder constantly rejuvenating and master minding the iconic Subliminal label which has just issued its 200th release.

7. This will he his first return to Leeds in nearly two years.

8. It will compliment the release on his Summer 2009 Subliminal Sessions CD perfectly

9. Over the years Erick has been responsible for many house music classics

10. It will be he last Kissdafunk at 02 till end of the year