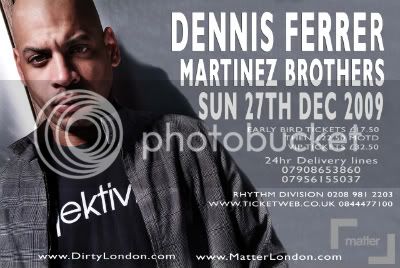 Right place, right time. It's an old cliché, but it's one that's been the definition of Dennis Ferrer's musical career. Just as the dance music world was heading into the world of afro-centric house, Ferrer was there. And then, when it began to embrace the mix of tech and soul, Ferrer was there again, leading the way with his impeccable productions. As Ferrer goes, it seems, so does electronic music. And, as someone who's never content to do the same thing twice, it's clear that he'll be staying on top for years to come.

Do we need to tell you how great this is going to be?

Dennis Ferrer has been nominated for a Grammy.


New Jersey based House music producer DENNIS FERRER has just been nominated
for a Grammy for his "Dennis Ferrer Objektivity Mix" of Dido's "Don't
Believe In Love" (Arista). Talking en route to a gig Ferrer said "I feel
honored and lucky at the same time. Very few of us in our genre get the nod
of acknowledgement when it comes to being judged in the mainstream." Adding
he found out about the nomination this AM when "Carl Craig sent me a text
and said "congratulations on your Grammy nomination". I texted him back
saying "oh, you've got jokes now". I thought he was talking about my new
record. Then he called me saying he was serious and my jaw dropped."