Crash winter warm up with matt hardwick and super8 and tab!

After the massive success that was the opening night with Sean Tyas & Simon Patterson we at Crash bring you another line up not to be missed!

Ladies & gentlemen we bring you 2 of the major stars & producers of trance, IN THE WORLD. We bring you Gatecrashers' Matt Hardwick & Anjunabeats' Super8 & Tab.

MATT HARDWICK is the epitome of an international DJ. He lives and breathes electronic music. Since his inception into club culture Matt Hardwick has completely immersed himself in it. His rapid ascendency into dance music with the global phenomenon that is Gatecrasher is something which has been well documented. The association with Gatecrasher, the first of many landmark achievements in his career, took Matt's name from the dusty streets of Sheffield to the bright lights akin with international stardom, along the way seeing him play some of the greatest events the world of clubbing has to offer. Whether it was playing at the sell-out Don Valley stadium gig in front of 28,000 people on New Years Eve 2000 or playing to 15,000 people at the amazing Gatecrasher NEC events - Matt was the heartbeat of the lion that roared throughout the trance boom of the late 90's.

However, Matt's growing reputation really came to the fore only as recently as the beginning of 2002 with the completion of his first Radio 1 Essential Mix. The mix struck a chord with clubbers and promoters the world over. The resounding success of his debut Essential mix led to Radio 1 requesting a follow up in October 2005. This mix was so popular it was quickly shortlisted for the 'Essential mix of the year', only to be pipped to the post by Sasha.

In the ten years that he maintained weekly residency with the globally renowned Gatecrasher, Matt packed and delighting dance floors from Sydney to Los Angeles to Moscow and Johannesburg.

In late 2004 Matt's position as Gatecrasher resident ceased, as he felt that the resident tag was inhibiting his development as a DJ in his own right. Entirely amicable his departure raised many an eyebrow but went on to surpass even the most cynical of these critics as Matt's career blossomed. A testament to his ability is that, whilst travelling the globe over, Matt is still booked regularly to perform for the club, as he is for Godskitchen, Minister of Sound, Slinky, Passion and The Gallery.

Whilst retaining a strong diary of club dates, Matt has also been a prominent feature at many of the world's most prolific festivals including 50,000 people at Castle Dance in St Petersburg, Godskitchen Global Gathering, Creamfields, Homelands, Escape in the Park, South West 4, Laserpoint Festival in Finland and Gatecrasher Summer Sound System. Whilst enjoying successful tours throughout Asia, Australia, Africa, Europe, North and South America.

All this aside, it is perhaps Matt's production profile which has brought his name to the fore of recent years. From his first two singles with the popular duo Smith & Pledger, entitled Day One and Connected, through to his club anthem 'Slave to the Machine' with fellow DJ John Askew, Matt's music has received extended support from the likes of Tiesto, Paul Oakenfold, Armin Van Buuren, Ferry Corsten and Judge Jules and found its way on to over 50 compilations worldwide. To follow up on the success of their joint single, Matt and John launched a double CD compilation called 'Live as' for 'Discover World' in 2006. Mixed club live and box fresh the 'Live As' series gives a raw appeal that most commercial album somewhat lack, providing a real experience of the dj in his truest form.

However, it was 2007 when Matt Hardwick really came of age when after kicking off the year with his remix of 'Gulf – Impossible' was selected by Motorola, along with mixes by Mauro Picotto and Marco V, to launch the new David Beckham Razr phone, before being invited by his old family in Sheffield to recorded an underground mix on the retrospective album, “Gatecrasher Immortal”, following the fire at the superclub. The album received critical acclaim and went on to sell an unprecedented 100,000 copies and shortly after saw Matt being voted number 48 in the world in the 2007 DJ Mag Top 100 Poll (up 16 places from 2006).

Leading the charge of the Nordic trance revolution are Finland’s Miika Eloranta & Janne Mansnerus… better know respectively as Super8 & Tab. Up until 2005 Miika & Janne were busy pursuing their own individually successful recording careers, but after a chance meeting resulted in the hugely successful collaboration projects 'First Aid' and 'Helsinki Scorchin' the prolific partnership was born. In Tab’s own words: "creating music became double the fun as a partnership."

Alongside the ever-present melodic bias of their music, Super8 & Tab fuse their
productions with unique and edgy sounds and vocals. This style has marked them out as forward-thinking originators and pushed them to the front of the breaking trance pack, with the list of DJs supporting their tracks reading like the veritable ‘who’s who’ of the turntable-spinning elite; release in, release out, Tiësto, Armin van Buuren, PVD, Above & Beyond & Ferry Corsten regularly smash their tracks club-side and on the radio.

Super8 & Tab have become an integral part of the Anjunabeats label and release schedule since the initial success of 'First Aid', 'Helsinki Scorchin' (Top 20 Tune of 2006 in DJ Magazine) and 'Won't Sleep Tonight'. They dropped the vocal anthem 'Needs to Feel' in early 2007 which featured heavily on radio and leading compilation brands as it grew into one of the year's underground anthems. 'Suru' proved to be a more than worthy follow-up, picked out by DJ Magazine as “the tent-pole release of Anjuna’s summer”, while their first collaboration, the 'Worldwide' single with fellow Anjuna-ite Mark Pledger, received similar critical acclaim, as did their debut compilation CD 'Anjunabeats Worldwide Vol 1' which prompted DJ Magazine to ask "when did trance get this darn good again?" and landing 'Compilation Of The Month' in Mixmag plus a nomination for 'Best Album Of 2007' at the IDMA Awards.

2008 saw Super8 & Tab further cement their position as one of the hottest production outfits on the planet with their 'Elektra' single topping buzz and sales charts everywhere and becoming one the summer's biggest festival anthems. On the remix front they added their magic touch to Bart Claessen & Dave Schiemann 'Madness', Luminary 'Amsterdam' and Martin Roth & Alex Bartlett 'Off The World', yet undoubtedly the highlights in amongst this busy release schedule were recent Super8 & Tab remixes of Paul van Dyk 'New York City' and Ferry Corsten 'Made Of Love' which look set to elevate this talented duo into the realms of the trance elite.

Aside from their studio work, Super8 & Tab have wasted no time in personally taking their music to the people in a busy tour schedule that sees them performing DJ sets at leading around the globe, including Gallery / Ministry of Sound, Godskitchen and Inside Out in the UK, European brands such as Mayday and A State Of Trance alongside their own Hallmark residency in Finland, plus Anjunabeats Worldwide Tours. Recently they've completed the Future Music Festival tour of Australia and have regular dates in the USA, South America and Asia.

Super8 & Tab are currently finishing their debut artist album, scheduled at time of writing for release in autumn 2009. You can also catch them each month on Anjunabeats Worldwide Radio.

We also bring you one of the UK's rising stars, The Syndicates 'JOEL D'.
Joel D is the longest serving of the Syndciate and Liberate Events Residents and justifiably so.

Joel nearly always plays peak time and deserves that ackolade, mesmerising crowds
with his no nonsense, upfront mix of chunky, uplifting and progressive trance. His professional attitude and approach is second to none and is the primary reason why he has warmed up for practically every major headline act on the circuit including Armin Van Buuren, PVD, Above and Beyond, Sander Van Doorn, Paul Oakenfold, Ferry Corsten, Markus Schulz and Eddie Halliwell to name a few, for brands such as Godskitchen, Gatecrasher, Fire It Up and Slinky. His intelligent approach to DJing means that Joel can formulate and structure a set to take any given crowd where ever he wants. This is the main reason Jono Grant from Above and Beyond specifically requested Joel do the warmup for them when they brought their Anjunadeap Album tour to the Syndicate. Combine all this with seamless mixing, technical wizardry behind the decks, along with some seriously upfront tunes and you are guaranteeed to be left wanting more!

Playing alongside the above, will be residents, Guy Alexander and Aiden Howard.

If you are on Facebook please join our Crash group. The links to both our event page and also our group are listed below.

Thank you for your time and we look forward to seeing you on the 21st.

THE FUTURE OF CLUBBING IN THE SOUTH WEST!!!!! 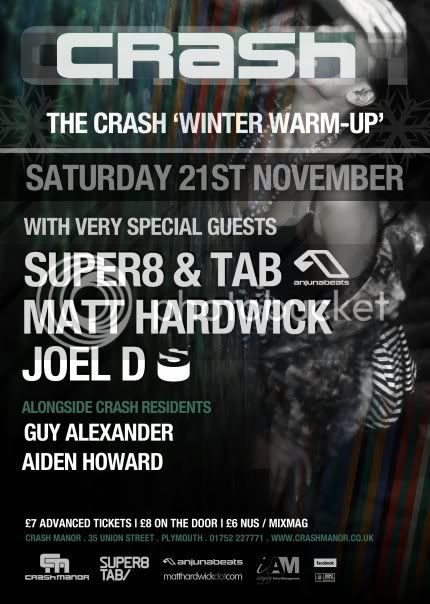