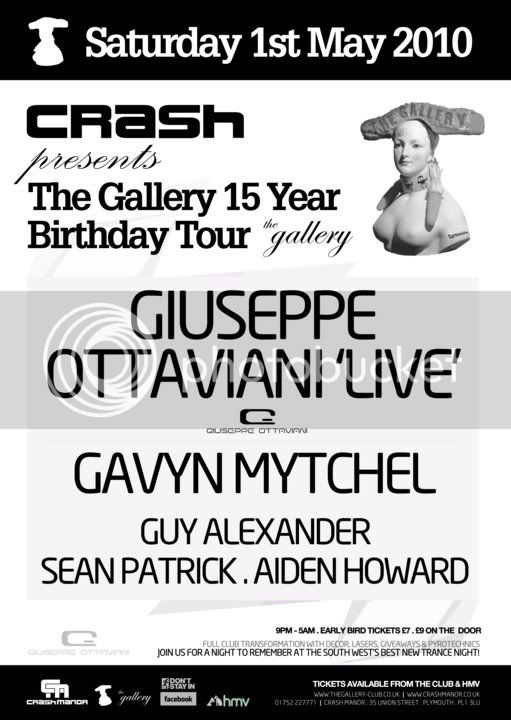 It is with massive pride that we can announce 'The Gallery Tour' is heading to the south wests newest & best trance venue, Plymouths 'Crash Manor', for one of the best parties in a long time.

Bringing not only one of Europes best trance DJ's & producers, GIUSEPPE OTTAVIANI, but also The Gallery resident himself, Gavyn Mytchel, playing alongside our residents Guy Alexander, Aiden Howard & Sean Patrick, & the massive club brand of The Gallery. Massive club transformation, decor, giveaways, visuals, pyrotechnics, lasers & much more. This is really going to put the south west back on the trance map, where it belongs.

Giuseppe Ottaviani has started to release tracks on Vandit Records, Paul Van Dyk’s renowned label, in 2001, and since then can be considered one of the most talented producer and influential recording artist in trance music. His musical education started at the age of 4 years in Viterbo, a small Italian town near Rome when he first started to play the piano. After music school in his early childhood and studies of classical music as a teen, he discovered electronic music and started to spin his first DJ-sets at clubs and on local radio stations.

His deep enthusiasm for anything related to technology led to him beginning to use his computer to make and produce his own music and when he met Andrea Ribeca and Giacomo Miccichè in 1999 (two electronic music enthusiasts and also DJs) quickly decided to start their own music project: NU NRG - Giuseppe’s starting point as a professional musician and producer.

Since that time Giuseppe Ottaviani released club anthems like Dreamland, the Spaceflower EP, Butterfly, Casino, Connective and the smash hit Free Fall and won numerous awards like the Trance Award in 2004 and 2006 for Best Live Act. No wonder why he is playing on the biggest Festivals and greatest events while touring all over the world. With forthcoming appearances for Gatecrasher, ASOT & Cream Ibiza, at Amnesia this is looking like an amazing year.
Since 2005 Giuseppe Ottaviani has started his solo career with big success. His solo-productions like Linking People, Through Your Eyes or his compilation The Vandit Sessions 4 receive an outstanding feedback from all around the globe. The tracks La Dolce Vita and Far Away on Paul van Dyks new album In Between again show his quality as one of the most creative artists in this scene. He also keeps on performing live with more enthusiasm as ever before:

“Playing my own music live is something special, something that really touches me.” Giuseppe says, “it is an electronic music concert, performing on stage allows you to get through to the people, they really breathe the music, you can establish a two-way bond with them and the music itself changes and reacts to the people, this is why each show is different, unique.”
What ever the next year will bring for Giuseppe Ottaviani, it will be big!

Gavyn Mytchel has enjoyed a meteoric rise to prominence in recent years. From his humble beginnings as a clubber, firstly at Cream at Nation to then becoming a regular on The Gallery’s dancefloors, Gavyn has always been one to chase his dream.

One of the lucky few, Gavyn went on to land a residency at The Gallery at Turnmills alongside Tall Paul, sign his first track to Armin van Buuren’s Armada label, get recommended by Fergie as his tip for Mixmag Future Hero and snapped up by Ministry of Sound to present one of their flagship radio shows.

Now a weekly resident for The Gallery at Ministry Of Sound, a regular at leading clubs across the globe and a producer synomous with leading labels and A list dj support; Gavyn has made the leap from a promising, rising star to one of the industry’s consistent and widely respected names.

Here he is seen playing on a wide range of cutting edge lineups alongside the biggest and best djs and producers. Winner of ‘Mixmag’s London Club of the Year for the past three years, The Gallery has now entered its thirteenth year as a weekly club night. Gavyn has become a firm favourite not only with The Gallery faithful but with a cross section of headlining djs leading to requests from the likes of Armin van Buuren and Hernan Cattaneo for his prescience on the hallowed Turnmills decks when they visit.

A regular at the leading clubbing establishments across the UK and beyond including the likes of Godskitchen, Cream, Inside Out, Passion, Promise and Tangled to name but a few. Gavyn also enjoys a busy international diary, topping up his Air Miles with recent trips to the likes of Dubai, Singapore, India, Thailand, Cyprus, Malta, Ibiza, Russia, USA, China, Egypt, Italy, Holland and many more.

Away from the DJ circuit Gavyn has gained widespread recognition as a consistent producer. Under the 'Mnemonic' guise his very first track 'Insurrection' was snapped up by Armada's Captivating Sounds. Gavyn's follow up was the dancefloor smash "Forbidden" which was instantly signed up for Duty Free’s sister label "Intensive".

Recently Gavyn’s release schedule has continued apace and seen him release material on a range of labels including ‘Vocoder’ on Noys, ‘Resurrection’ on JOOF recordings and the huge collaboration with Albert Vorne entitled ‘Coincidence’ on Mazeman. ‘Eye Typer’ and ‘Neural Netwerk’ kicked off 2007 with support from the usual range of leading djs that Gavyn’s tracks have become accustomed to being supported by.

Gavyn’s wide ranging sound; taking in progressive, tech and trance influences makes him a perfect choice for one of the flagship radio shows on Ministry of Sound radio. Regularly welcoming guest mixes and in-studio appearances from the biggest djs around, ’The Gallery Show’ is broadcast every Friday night 8pm – 10pm GMT from the world famous Ministry of Sound in London.

Coaches are available & will be announced shortly.
Tickets are on sale now

For more info please check out our Facebook group and event pages listed below.

Thanks for your time and we hope to see you there!!!!