Well since I got a lot of good reviews on the short review I wrote in the DC10 topic not long ago, I went ahead and elaborated it a bit, now with pictures and more of a verbal illustration.

Monday is here, waking up at 13:00 PM, after a very long night at Space, Danny Tenaglia, Tom Novy and Layo and Bushwacka! completely shattered the club to pieces last night, it was such a great experience, my body still carries a sense of euphoria, completely driven from 6-7 hours of dancing nonstop, I need a breath of fresh air...

Because I am about to relive it in 2 hours, and god, it's about to get even more intense.

We get into the car and start the short 15 minutes drive to DC10, what more can be said about Circoloco Monday Morning Sessions @ DC10 that hasn't been said already, it's not a mega club, it's practically a dump.

An old hangar located just near the Ibiza Airport, it's a place where everyone can get down and dirty, filled with a sense of sleaze and impurity, but don't be fooled, it's the good kind of both.

It's not flashy and extrovert as Space, Amnesia or Pacha, it's not a place where models and pop stars come to mingle and stir their drinks while listening to the sounds of cheesy Electro or Funky House.

It's the most respected and in demand after party of the island, simply because no one can match it, hell, even Space closed its Monday after parties becuase no one showed up, everyone goes to DC10 on when Monday arrives.

There's actually no REAL way to describe Circoloco @ DC10, it's a different experience for every one, whether you choose to kick it inside, with the dark sounds and more of a rough feeling, or, (And this is a BIG "or"...) if you choose to be on the terrace.

The terrace, is one of the craziest places on the face of earth, I can honestly say that the only place that delivers a similar feeling is Panorama Bar in Berlin.

Walking in to the terrace is a journey, it's a mixture of some extreme gay crowd on the right side, that's their territory, packs of muscular tanned German, Spanish, Greek and Italian men, dancing in groups, you can just smell the sex and sins in the air walking through this area, but on the other hand you'll also meet cheeky elegant Spanish and Italian ladies dancing their thongs off, waving their hand held fans with a big genuine smile of ecstacy on their faces.

There is no dress code in DC10, you are not obligated to be conventional, you can be whoever and whatever you want, a lot of the people choose to wear masks or disguises, surreal hats and clothing, there are no rules...

No feeling can match the the feeling of entering the terrace, the strong Red colour on the walls immediately lets you know exactly where you are, the big industrial fans shooting a blend of Cold/Hot air on you, the afternoon light of the sunset is cought between the fans and your eyes...

The music in DC10, is a whole other story, it's the underground, it's what you dream of hearing in most clubs in the world, but you don't get a chance to.

Seniorita Tania Vulcano goes up to play her main set after Matt John warmed up the vibe so well, Matt has a white mustache of coke smeared above his lips as an act of joy and foolishness, he looks like a young boy who just had 10 lolly pops one after another, he spins his last record and clears the booth for Tania.

Tania Vulcano is the queen of DC10, the immortal resident DJ who is pratically the symbol of the club, she's feminent, she's sexy, she has charisma, when Tania plays, the place is enchanted, her sets are filled with a blend of Minimal Tech House, spiced up with an Acidy flavor and modern Techno beats you just can't ignore...

But the most important thing, the one common denominator which no DJ in this club can abandon, is the Bassline.

The monstrous speakers handle the Bass so well, the DJ is the ignition key, the speakers are the engine, the bass is pumping so hard from the speakers, it's what keeps the party alive, that's all this place really needs to keep going for hours and hours, a solid bassline, leave the rest to the crowd.

And with every beat that comes out of the speakers, you just get carried away into a whirlpool of joy.

The DJ Booth suddenly becomes a fiesta, 10-15 people except for the DJ are in the booth, skinny girls in Bikinis dancing, taking their tops off and throwing them to the crowd...

Danny Tengalia shows up, dressed up like a bumble bee, dancing and shouting to the crowd, suddenly Ricardo Villalobos and Richie Hawtin stops by for a visit before their Cocoon night to taste the vibe, laughing, having a few drinks and exciting the crowd.

One of the most rememorable moments was in the summer of 2003, Steve Lawler arrived to the club after playing a long set in the Space terrace, Lawler was spotted in the DJ Booth, the crowd immediately went crazy, Lawler took off his shirt, jumped into the crowd and was carried all around the terrace, with his hands in the air.

Tania finishes her set and passes the wheels to Loco Dice, Loco focuses more on minimal beats, he is not a man of big build ups and break downs, Loco doesn't build his sets on peak moments, his entire set is a peak moment, he builds the vibe using accurate Basslines and solid percussions, the entire set has a tribal, sexy and exotic feeling, but don't let this fool you, Loco can be brutal as well...

Then comes the big attraction, the "Sit Down", one of the moves on which DC10 built its reputation in the last 2-3 years, Loco Dice drops one of his monster tunes "Seeing Through Shadows", the minimal beats are telling a so called quiet story, but then the break arrives, and the mood shifts...

Everyone and I do mean everyone sits their ass down, clapping, whistling, shouting, you hear Spanish, Italian, German from all over, excitement is in the air, you just know something big is about to happen.

The break seems to last forever, but the anticipation is worth it, Adrenaline spreads all over your muscles, blood is flowing so fast in your vains, your heart is racing as you sense that the climax is so near, then it happens...

The beat comes in and with it, the club lifts off, hundreds of clubbers jump up with their hands up in the air, a sense of Hedonism and Bliss spreads all over the place, you shout, you scream, you channel in all the energy from around you, you feel free, you feel alive. 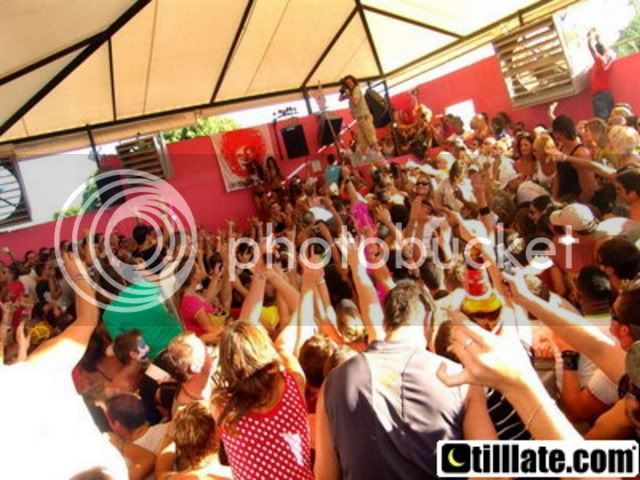 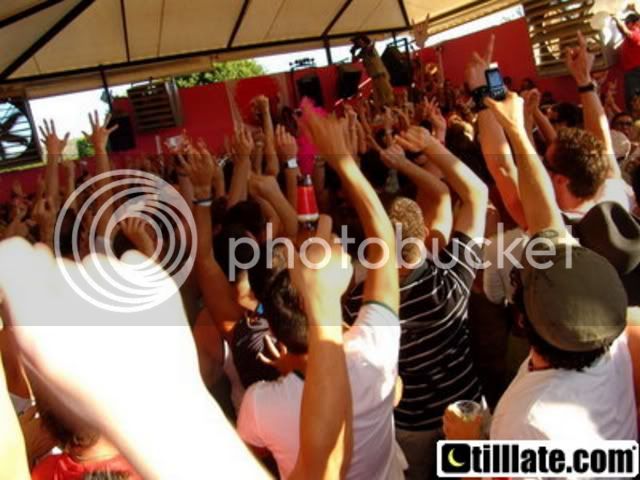 The entire club is like a ball of energy, the crowd is an orchestra and the DJ is the conductor, it's something every die hard clubber must experience personally, this was truely one of the greatest moments in my life and I'll remember it to the day I die.

It's when moments like this seem to bind together in DC10 that I feel so happy to be a part of this thing called the Electronic Music and Clubbing scene.

DC10 may not be here for long, so while you have the chance, get a flight, come to Ibiza and witness the magic of this place, possibly for the last time, because if you haven't seen it yet, you haven't seen what clubbing is all about!

I leave the rest of the journey, for you to discover.

A sense of History huh?! Won't be there for long I'm afriad!


Thank you for bringing me back for this lovely day!

you can just smell the sex and sins in the air walking through this area, but on the other hand you'll also meet cheeky elegant Spanish and Italian ladies dancing their thongs off,
Click to expand...

That just about sums it up......very well written too!

No offence to anyone who loves this club (good review all the same mate) but it sounds absolutely dreadful to me, the actual club itself appeals, an old hangar with bare walls just like raves from the old skool,proper order, but i seriously cannot ever get into that music i think it's dreadful.
Last edited by a moderator: Sep 2, 2008
U

Jonny68 said:
No offence to anyone who loves this club (good review all the same mate) but it sounds absolutely dreadful to me, the actual club itself appeals, an old hangar with bare walls just like raves from the old skool,proper order, but i seriously cannot ever get into that music i think it's dreadful.
Click to expand...


have you ever been? how do you know what kind of music it is?

utagaura said:
have you ever been? how do you know what kind of music it is?

Its not just boring plinky plonky minimal!
Click to expand...

No ive never been at just from reading on here and elsewhere it appears it is mostly minimal that is played,anywhere that plays that music you wont find me, a pity as it looks the type of place where uplifting European Techno would go down well.
I

Jonny68 said:
... this club ... sounds absolutely dreadful to me ...
... i seriously cannot ever get into that music
i think it's dreadful.
Click to expand...

if i d go to es vive i fully intend to, the music will be to my liking8)

Jonny68 said:
if i d go to es vive i fully intend to, the music will be to my liking8)
Click to expand...

Waiting for yor review of DC10 from October 2008 that is upon us!
H

Great review, thanks, really conveys essence of DC10. Always thought I wasn't "into" that kind of music, then you go and listen and dance and it blows you away...!
Hope they don't kill it completely, will really change the face of things out there.
P

excellent review......dc10 is really unique und embraces all, what clubbing is about...the closure would be a irreplacable loss for the clubbing destination Ibiza...

Thanks for the nice comments, I tried to be as figurative as I could, there are just not enough words to describe the place, the people and the feeling of Circoloco, It's exactly a month before the closing should occur, and I can't wait to be there...

Hoping for the best
M